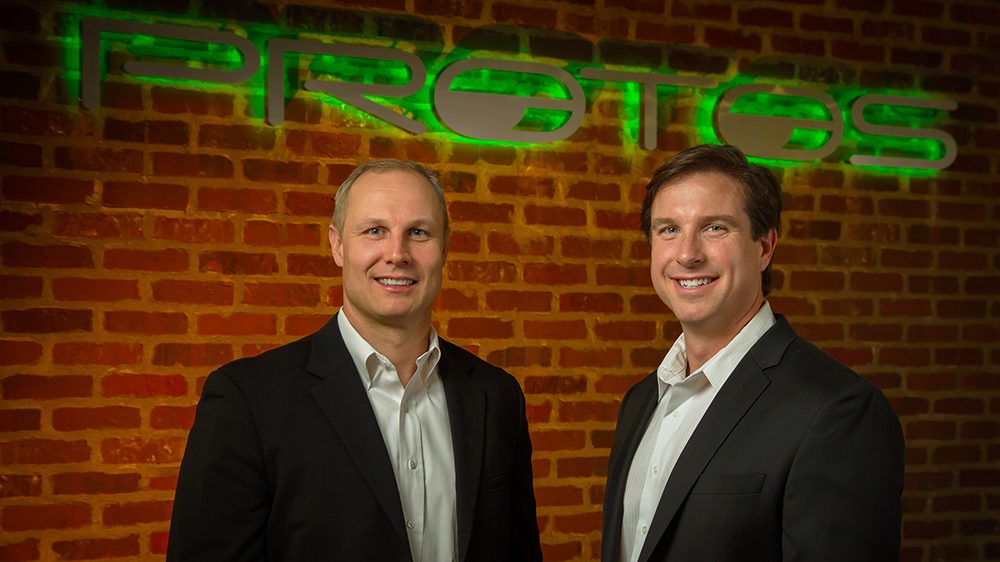 Patrick Henderson and Chris Copenhaver, both Class of 1999, disrupted the retail security industry when they began Protos Security. Their business grew quickly, partially from the trust they had in each other, based on their shared background and values. Photo courtesy Protos Security.

Patrick Henderson ’99 and Chris Copenhaver ’99 are brother rats, best friends—and business partners. They started Protos Security in 2006, quit their day jobs in 2011, and two years ago, they sold part of the multimillion-dollar company.

“It’s been a blessing,” Henderson said. “It doesn’t get much better than that … to be brother rats, but also best friends and to be able to build something.”

The company didn’t begin—or become successful—overnight. The idea came during church league bowling in 2006. Between frames, a friend who worked for Advance Auto Parts relayed some issues with retail security guards at his stores.

“They needed a better solution … a better mousetrap,” Henderson said. “Chris quickly did some homework and studied the industry.” The two presented a plan to Advance Auto Parts, and “they gave us an area to test a pilot program.”

The business came together in short order. The brother rats give a lot of credit to the “speed of trust” and their shared background. The entire “fabric” of their business was based on VMI tenets—including the Honor Code. In the early days, the two had to make snap decisions and sometimes take risks with little time for pauses.

“If you don’t have that trust, you can’t do that,” Copenhaver said. VMI also teaches that “no matter how bad the day is, for the most part, you realize that … not only will you survive it, but you’ll be better for it. You can find ways to kind of laugh about it … it keeps you running lean and keeps you running forward instead of miring down in that ‘would have, could have’ and self-pity.” Fifteen years ago, the retail security industry was not very transparent. Before Protos, industry norms were dominated by large companies. Many smaller, regional security companies followed the lead of the giants in their operations.

Security companies scheduled officers and billed retailers—whether or not the officers showed up or showed up on time. If officers reported an incident, the report went to the security company. Local managers sometimes saw these reports, but the information rarely trickled up to national managers.

Officers felt little ownership in their jobs. The security officer’s standard procedures were often a coffee-stained, wrinkly stack of haphazardly stapled papers. Timecards were on paper and had to be mailed in, then processed by hand.

Beginning with little more than an excel spreadsheet and some grit, Protos streamlined the process. They contract with Fortune 500 retailers and subcontract local guard companies. They’ve built a successful platform that works nationwide.

The company’s software started as a “clunky desktop program”—that still produced results. It’s progressed through several stages of development to its current status, a web application. Developing the web application led Protos to “one our best hires, Brother Rat Cameron Tabor [’99], who came on as our chief technology officer in 2014,” Henderson said. “Cameron was a Godsend, who took our sub-par software and developed it into a world class software product.”

Tabor’s leadership and vision brought clients Protos’ current product: A real-time, one-stop shop portal for accountability and visibility into their guard programs. For clients, the immediate and continuous visibility is a “gamechanger,” Henderson explained.

Security officers can clock in and out using their own smartphone or the store’s phone.

Clients wanted accuracy and GPS validation, and Protos provides that. Using the web application, officers can file incident reports, including photos. Retail clients can send updated procedures to the officers with pinpoint accuracy. The all-digital ecosystem has boosted efficiency across the board.

“The accountability that we provide in the security guard industry has disrupted the industry,” Henderson said. “To compete in this space now, you’d have to have some form of the tools we created.”

Protos started out with a large, steady client, Advance Auto Parts. For the first few years, Copenhaver and Henderson pitched their company to anyone who would listen.

Anyone included Food Lion’s loss prevention vice president, who, up until 2013, had put off the sales talks from Henderson and Copenhaver. One day, he called as he was driving through the area. He’d be in Roanoke in a few hours—and he wanted to talk.

At the time, Protos was operating out of an unremarkable “two and a half offices.” The pair looked around to see what they could do to improve—and impress the Food Lion vice president.

“We had to get the place looking good,” Henderson recalled. “[We’d] been waiting years for this.”

Somehow, they managed to temporarily appropriate an almost-empty office in their building. The contractor who rented this office stored a few boxes there and was usually not in the office. They quickly moved in furniture and decorations for the meeting.

A very small company at the time, they called in part-timers and everyone who worked from home. They instructed them to “stomp around” and to make the phones ring by calling each other—anything to give the impression of a bustling, vibrant operation.

“The accountability that we provide in the security guard industry has disrupted the industry. To compete in this space now, you’d have to have some form of the tools we created.”

The Food Lion vice president arrived, and the partners launched into their proposal. Their potential client, the two BRs noticed, liked to lean back in his chair. Way back.

The chair’s bolts were creaking dangerously.

Henderson and Copenhaver knew they needed to wrap up their pitch before it ended prematurely with an unhappy Food Lion vice president sprawled on the floor. Their company’s future depended on the dubious strength of a few bolts holding a secondhand office chair together.

As Henderson was contemplating that future, the office’s rightful occupant wandered by in the hallway. He stopped and craned his neck to see what was going on—in his office. Thankfully, Henderson said, he continued walking without asking any awkward questions.

In the end, the bolts held. The Food Lion vice president said yes, to a few stores.

“If we do well with those, will you give us all your stores?” Henderson asked boldly. The Food Lion vice president began laughing. He said no—but he liked the way they thought.

Eventually, he did give them all the stores.

Henderson and Copenhaver are always looking for new opportunities. Two years ago, another company approached them about selling. For them, it was a great transition—they remain as minority owners. With the day-to-day operations in capable hands, Copenhaver and Henderson are free to focus on growing the company in other directions.

For growth ideas, one direction they always check is fellow alumni, and what they are doing. When their copies of the Alumni Review arrive, they scan through it and call up other alumni who are doing interesting things.

“You can miss opportunities if you don’t get out and talk to people and get to know people and what they’re doing,” Henderson said.

Over the last couple of years, Henderson and his wife, Heather, stepped back and looked at their lives. A devout Christian couple, they gave thanks to God for their blessings. They looked at who had helped them along the way and knew VMI had played a huge part in their current circumstances. Working with Ramon Williams ’90, senior major gift officer at the VMI Alumni Agencies, they endowed the Henderson Hope Scholarship. The scholarship is aimed at someone from the Roanoke, Salem, Botetourt, and New River Valley areas who has “determination and grit,” Henderson said. “Not someone who’s a total academic, but someone who needs a little bit of assistance.”

Henderson agreed. He and Heather, who was his Ring Figure date, started the scholarship for someone who “wants to work hard,” has already proven a work ethic in high school, and who needs a scholarship. They’re looking forward to meeting their scholarship recipients in the future.

Giving back to VMI isn’t necessarily the first thing people think of, Henderson said. He encourages other successful alumni to think about how VMI has helped them—and to “turn around and think about … the opportunity to give back.”

He and Copenhaver are living proof the “VMI family is alive and well, and that grit and determination can still produce and … bear fruit.” Having “a Christ-like attitude … respect and morals and those types of things do still pay off,” he said, pointing out that their success came through God’s blessings and hard work.”

“If we can do this, you can do this, any alumni can do this. But it took both of us, along with the support and love from our wives. [We] could not have done this alone.”

Copenhaver and his wife, Jess (also his Ring Figure date), also worked out their own VMI scholarship with Williams. It is called the Copenhaver Entrepreneur Opportunity Scholarship. Not to be outdone by his brother rat, Copenhaver added a tiny bit extra to his scholarship.

“It was a pleasure to work with Patrick and Chris as they decided on how their giving would have a lasting impact on a young man or woman attending VMI,” said Ramon Williams ’90, VMI Alumni Agencies senior major gift officer. “As you read their story, it is easy to understand why they give … to give another young person a chance to succeed without any barriers to do so,” Williams said. “No matter their background, if they are willing to grind, stay focused, and work hard—then anything is possible.”

As a major gift officer, Williams is in a position to see “exactly what VMI has meant and done for so many who have graduated from the Institute. I get to understand their story, why they chose the road less traveled, and how a VMI education has shaped them in ways that has led to their success in life, military, and/or in business.”

“It’s exciting to see and know that VMI’s educational system works and hopefully will lead many others to give back to VMI in an impactful way,” Williams concluded.