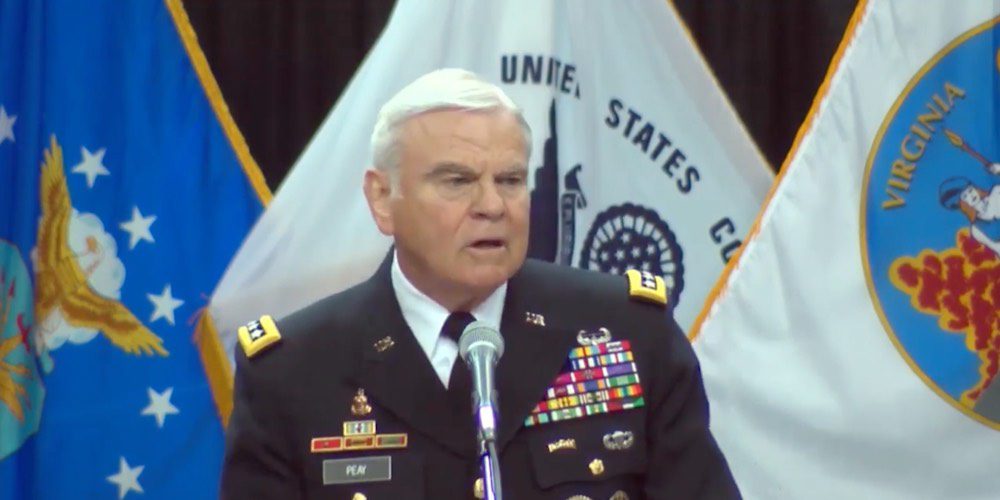 “Hard work in America is still a competitive advantage, as it has been since our nation’s earliest days,” said Peay, who was this year’s graduation speaker. “Hard work brings a steadiness to life and joy to accomplishments and success. And it also is a bedrock of wisdom.”

Luck is said to be outside of an individual’s control, Peay acknowledged—but is it really? “If you leave the Institute with no other message, I hope it will be this: you can make your own luck with hard work and learned wisdom,” the superintendent stated.

This year’s graduating class is smaller than last year’s, which numbered over 370, but includes a mix of individuals with notable achievements, including Annika Tice ’19, VMI’s first recipient of a Fulbright award in nearly two decades, and Alec Hoopes ’19, the top-ranked Army ROTC cadet in the nation.

Those graduating this year came from 31 states and three foreign countries. The most popular majors for 2019 graduates were international studies, civil and environmental engineering, and economics and business. By the end of the summer, 54 percent will have commissioned into the armed services.

Addressing the members of the Class of 2019 and other graduates was valedictorian Joel Thomas ’19, a biology major with minors in philosophy and literary studies. In his remarks, Thomas discussed how the VMI that graduates thought they knew when they matriculated is not the same VMI they will carry with them the rest of their lives.

“The VMI we have known and experienced is not a place, though it is intimately tied up with this physical place, but a living, breathing entity,” stated Thomas, whose future plans include entering graduate school to study neuroscience. “We have come through a system and it has changed us.”

Both Thomas and fellow speaker Eli Facemire, president of the Class of 2019, noted that the September 2015 death of Sean Hoang ’19 during Rat Line training was a unifying factor for the class. Hoang was later found to have died due to a congenital heart defect.

“The loss of our BR Sean Hoang on 21 September 2015 did shake us deeply, but ultimately, it became the essence of the spirit of our class, the spirit of One-Nine,” said Facemire, a psychology major who hopes to become a military chaplain.

“Suddenly we realized that no one is guaranteed another day on this earth, no matter how young,” Facemire continued. “We, like Sean, must live life fully, holding nothing back in our work, our relationships.”

In his remarks, Thomas struck much the same theme, saying, “We have consistently come together, in times of both triumph and tragedy.”

As the years pass, members of the class will continue to encounter those opposite extremes of the human experience — and will need to persevere through them.

“We have a duty to each other and ourselves,” said Thomas. “We have a responsibility to continue the struggle we have begun here.”

Three awards were presented during the commencement ceremony. The First Jackson-Hope Medal for highest attainment in scholarship and the Cmdr. Harry Millard Mason Academic Proficiency Award were given to John O’Donnell, a distinguished graduate with Institute Honors who received a bachelor of arts degree in economics and business with a minor in mathematics.

O’Donnell also received the Society of the Cincinnati Medal for efficiency of service and excellence of character, along with the Richard J. Marshall and Sumter L. Lowry Awards.

The second Jackson-Hope Medal for second highest attainment in scholarship and the Col. Sterling Murray Heflin 1916 Academic Proficiency Award were presented to Marine Corps 2nd Lt. Anthony Sposato, who earned a bachelor of science in civil engineering with a minor in mathematics.